How I Re-Create Trench Warfare in the Classroom

When I studied abroad in London one of my favorite things to do was visit the Imperial War Museum.  I probably went every other week because there was THAT much to see, and all of it was fascinating!  Every war Britain had ever participated in to any degree was represented.  One of the exhibits is a World War I trench warfare re-creation.  One of my favorite parts of the exhibit (besides the walkthrough) was seeing all the actual signs that were used in and around the trenches during the actual war.  After walking through it for the first time, I couldn’t help but think how neat it would be for my hypothetical future students if they could sort of experience the same thing. 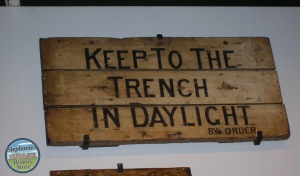 keep to trench in daylight 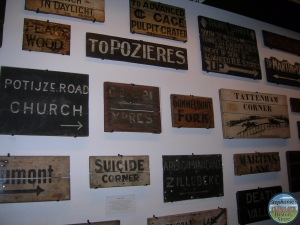 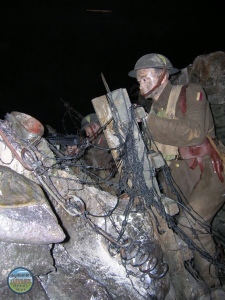 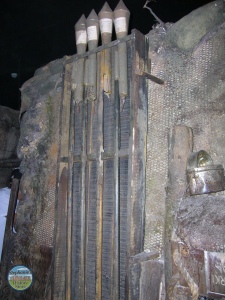 DISCLAIMER: you have to do this with students you can trust (there was one period last year I did not do this with because I couldn’t trust their during-activity behavior)…your kids WILL get rowdy, it WILL be really loud, and things WILL be thrown, but they will LOVE it!

The day before the re-creation, I tell my kids them that the room will look very different the next day because we will be recreating trench warfare.  I divide them up into the two alliances so we can start right away the next day.

The Prep Work
The great thing about this is you can totally customize it to each group of students since you’re in charge, there’s really no “script” to follow.

1.  I would start prepping the “ammunition” a week or two ahead of time.  I had students help me the last few minutes of each class ball up scrap paper to use as ammunition that they’d be throwing at each other (they didn’t know that yet though).  I had 2 big garbage bags full and that seemed to work well (the huge black bags, not the 13 gallon size) with classes ranging from 32-38 kids.  Before the kids came in the room I emptied one bag of ammo evenly in each trench.

2.  Divide the desks up in your classroom lengthwise on opposite sides of the room, this will be your “barbed wire” and the empty floor in the middle of the room will be no-man’s land.  The desks can be sitting up normally or with the legs in the air, depends on what you’ll be doing next period).

3.  I write down a list of 15 actions I would call out to the students.  Depending on how it went the first time, I add more for the next period.  If it’s an action where the “ammo” is being thrown I let that happen for about 10 seconds.

4.  In the last 5 minutes of class, I have the students gather up the “ammo” and put an even amount in each bag…I only had to bribe 1 class with a few extra credit points, the others all willingly helped clean up.

The Activity
When the students come into the room (the lights are off), they immediately go to their respective trenches and I told them to get down in the trench for safety.

Once each trench is settled you can say something like, “It’s November 1914, the war is in full swing…let’s see what’s happening in Battle X between Britain and Germany.”  I then give the kids the following sorts of action prompts and they follow through on them (these are just samples):

–5 British troops try crossing no-man’s land to kill the German captain, the Germans use gas against them, 3 British soldiers die.  (the “dead” soldiers come stand or sit with me at the front of the room)
–Britain sends supplies to the front lines, you all get a machine gun, “fire” your guns for 10 seconds at the Germans
–airplanes fly overhead mapping out trench locations
–a tank comes rolling at the German trench, you don’t know what to do so you shoot at it and waste a lot of bullets
–nothing happens, generals are planning their next move
–nothing still happens, you actually start to feel bored
–it’s been raining for a week, the trench is half flooded, rats eat any food you leave out
–2 soldiers from each trench get their legs amputated due to gangrene….they’re off the front lines
–the Germans try storming the British trench with cavalry, it fails, the British shoot 3 horses and kill one soldier
–it’s December 1914, the Christmas Truce happens between British and German troops…sing Christmas Carols, play soccer, and exchange presents
–an airplane flies overhead and drops bricks on your trench because it has run out of ammunition
–the German supply lines have been cut off, malnutrition and disease sets in, 2 soldiers die
–5 British soldiers attempt a night raid on the German line, one gets stuck in barbed wire, another is bayonetted, one is taken POW, and two are killed by friendly fire trying to make it back to their own trench
–10 German troops try storming the British trench, they are all gunned down by machine fire
–10 British troops try storming the German trench, they are all gunned down by machine gun fire
–the Germans get word that their comrades sank the Lusitania
–the British are ecstatic that the Americans are finally entering the war on their side
–morale and supplies are running low
–both sides take a last ditch effort to win the battle, all the soldiers stand up and shoot their machine guns at the other trench

I hope you have the opportunity to try this at least once, it’s really a LOT of fun, and in my “end of year feedback” form this is always mentioned as a favorite activity that should be repeated next year.  If you have any questions about it either leave a comment or email me at stephanieshistorystore@gmail.com

I have a whole section of my store dedicated to WWI, click HERE to see it!