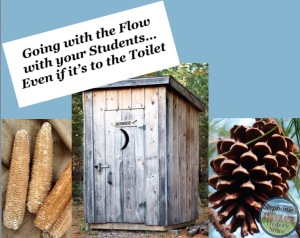 going with the flow

Sometimes when a student asks a question you groan inside because it’s so off topic (even if it’s a good question) because you just don’t have time to go into it at that moment.  Sometimes a question is related to the material but you just have so much to cover you dread how long it may take to get back to the lesson you had planned.  However, sometimes you DO have the time or the kids are just SO excited about the question/material that you go with the flow, even if it leads into the toilet 🙂

In my Tuesday class, which is a mix of 5th-10th graders, we are talking about explorers and exploration.  The focus this past week was specifically on Columbus and his voyages.  I knew that it was inevitable that one of the kids would be asking about what the sailors did on a ship when they had to go to the bathroom.  Well, since I have a ton of flexibility in the curriculum, and since the kids were SOOOO excited about it, I went with the flow 🙂

In the course of answering this student’s question, we discussed how the sailors would have chosen which of them was responsible for emptying the toilet bucket overboard (a lot of kids made connections to how chores are rotated and shared at home).  That then led to another student asking how they cleaned themselves without toilet paper so we talked about the pros and cons of corn cobs, pine cones, leaves, and yes, bare hands, which led us to talking about the different ways people relieved themselves and dealt with their waste around the world (such as someone living in crowded London versus a Cherokee Native American).  There were a lot of “ew that’s gross!” and “didn’t that hurt?” and “why didn’t they invent toilet paper/indoor plumbing sooner” type comments which in turn evolved into an interesting conversation about the timing of inventions and technology.

Well, almost 20 minutes later, they were back to working on their Columbus activities and we had thoroughly covered everything I know about anything related to going to the bathroom from the first human to today.  The kids were SO into the conversation that I felt pretty ok having gone so far off track with them.  They had ALL participated, they were animated, and I heard comments like, “I didn’t know that before.”  That was the only validation I needed to know I had made the right choice this time.