Well round 2 of lapbooking was a (mostly) huge success and we will for sure be using them in Music Theory next week!  This time around I had 20 explorers for the kids to choose from (no duplicates) and they made a lapbook about their explorer’s life/times/accomplishments/failures/etc.  They were able to format the lapbooks however they wanted, so since each kid would be putting theirs together differently, I started class by immediately going into the academic requirements for the lapbooks then letting the kids pick their explorer and start working.  I wanted them to have as much time in class to put them together and start researching as possible.  However, looking back, I think it was a mistake to not prep them first for actually putting their lapbooks together themselves (beyond what I had introduced at the end of class the previous week).

After our usual intro to class, I started with the requirements like, “your completed lapbooks must include where he explored, what his fate was, relations with local natives, if anything/anywhere was named after him, etc” (there were 19 things they had to include).  Once the kids had the requirements written down (because they were going to be finishing them at home), I had them come to the front table in pairs and pick out their explorer, gather the supplies, then they got started.  When they were seated with all their supplies I reminded them they could arrange the lapbooks however they wanted, and except for 3 of the features which we had already gone over, could include whichever pieces of information they wanted on whichever parts of the lapbook.  Well, my giving them 97% free reign in the creativity department didn’t go over as well as I expected. 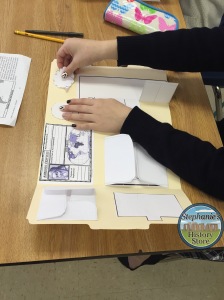 They struggled way more than I anticipated with having the flexibility to be creative.  I thought they would have thought, “awesome, I can do this however I want” but I can’t tell you how many kids asked “what should I put here” or “where should this piece go” to which I consistently responded “whatever/where ever you want.”  Since we had done them in a predetermined way last week, I think they maybe thought lapbooks were supposed to look a certain way (even though I had been telling them repeatedly the final product can look however they wanted them to look, as long as all the academic requirements were met).  Two pieces in particular seemed problematic to them: the long rectangle with 6 flaps and the index card type piece.  After half the kids asked what to put on those pieces, I got the attention of the whole class, and I emphasized again that except for the venn diagram, quote bubbles, and 4 square, they could put any of the required information on any of the lapbook features.  I said if you need a direction to go in, I had envisioned the 6-flap piece having requirements abc and the index card having requirements xyz, but I did tell them one more time that they could decide for themselves what they put where.

So probably half the class time today was just spent on them putting their lapbooks together (which honestly was totally fine, they were going to have to do a decent amount of research at home to get all the information to complete them anyway).  The kids were quiet for most of class, other than to ask me questions.  I actually said to them at one point, “you guys can talk and socialize while you work,” and they chuckled, but then went back to being completely engrossed in their work.

Side note: For the students that finished assembling their books before class ended, I had a few reference books with me so they could start researching their explorer, and I was VERY happy to see that they all knew how to use a table of contents and the index of the books.  One of the most frustrating things for me was when my sophomores didn’t know how to use an index, but then here is a room full of middle schoolers and they’re rocking it!  That was a really nice surprise this week…my faith in the future was a smidgen restored 🙂

I do think the more we use them the more comfortable they’ll be with having a certain degree of flexibility so I definitely see the potential here.  We’ll see how they do with them in Music Theory next week (they’re each going to make a lapbook for a composer)…maybe the 3rd time will be the charm in terms of getting a handle on them, then we can use them more frequently and make them at a higher level next semester.  If you’re interested, you can read about round 1 HERE. 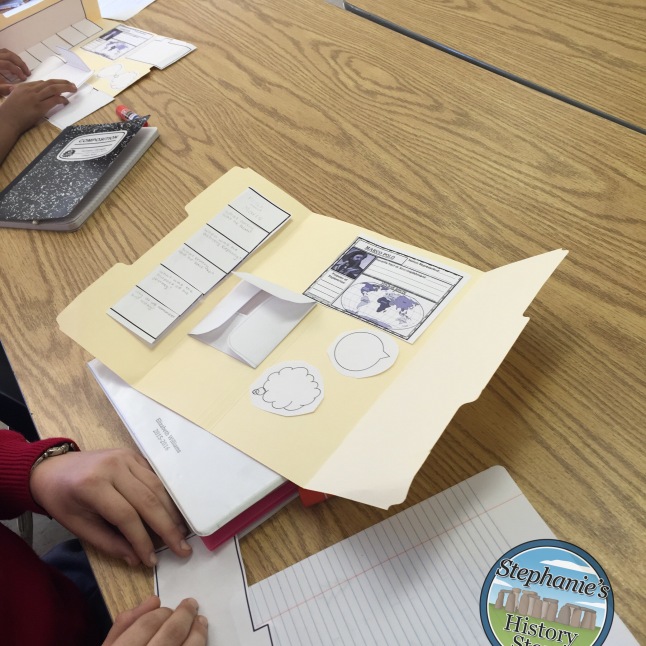